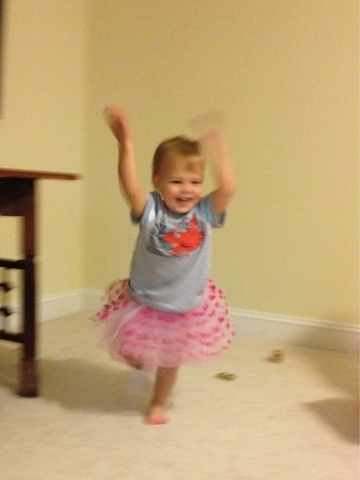 It's amazing how when you put a little Abba on the radio, this is what happens.
Almost immediately after Dancing Queen came on, Bennett yanked on the pink tutu and started gyrating madly.
I'm not certain whether he was embracing his Scottish heritage, doing a new spin on the classic Ace Vetura ensemble, or just needed a little more pink tulle in his day, but whatever inspired this outfit, it was freakin hilarious.
Plus, now I have blackmail footage for when he is a teenager and being a pain in the ass.
Not that I would do that. Ever. But I AM definitely storing a hard copy of this photo in a secure location, just in case...
Hey man, show us some love and "Like" us at facebook.com/MomOfMayhem for Mayhem throughout the day!
And look REALLY cool by telling your friends about us!
Posted by Caraline Hickman No comments:

One Down, One To Survive... 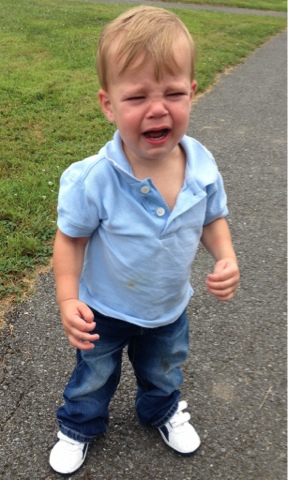 This week Sterling started back to preschool.
You would think that being down to one kid would mean I could get back to eating bonbons and working on my nails, right???
Yeah. You would be wrong.
See, I am stuck alone with one of MY kids. And because it's one of my kids, the work actually goes up the fewer kids are around.
In my fantasy world, I eagerly looked forward to several days of solo time each week with Bennett to bond. I imagined us having tickle fights and snuggle fests and generally loving all the "just the two of us" time.
In my real world, Bennett has sobbed listlessly for the entire three hours that Sterling is in preschool each day. It starts the moment he realizes we are leaving the preschool... and she is staying behind.
And it continues up until we pick her up again, THREE freakin hours later...
Yes, I am the mom whose kid's desolate screams echo hollowly down the hallways. The strange part is that it isn't Sterling screaming. She is perfectly content to stay at "New School" and play the day away.
Nope, I am accompanied by the distinctive bellows of my hearty boy child. And no matter what octaves he manages to climb to, it is always with the delicacy of a fog horn.
I took him to the mall today to walk since it was raining out. I walked 3.5 miles with him grousing the entire way about how much my company sucked.
I bought him a sugar coated soft pretzel just to have something to stuff in his sweet little mouth to shut him the hell up. He whined the entire time that he mowed through that thing.
I took him to the indoor playground hoping he would be distracted by that the frenetic energy and psychedelic toys that look like they are inspired by a bad acid trip. Or they would scare the shit out of him. Either way. As long as he stopped whining, I wasn't picky.
Instead, he sat in my lap and whined for about 40 minutes, then suddenly scrambled down and took off running.
I caught up with him right before he reached the automatic doors outside, but NOT before I got several "hey, is that your kid?"s. Yeah, hardly my first time at THAT rodeo. I honestly keep thinking I should switch to saying "nope, I don't know whose he is", but eventually the cops and CPS will track me down.
Might as well own my ornery little monkey up front and save myself some unflattering air time on the local news.
And besides, it is *almost* worth it to watch him jump up and down and clap his hands in glee when Sterling's teacher walks her out each day. Almost.
He launches himself at her and covers her in slobbery kisses while gibbering unintelligibly, like a tween girl at a Bieber concert. I still can't decide whether it is incredibly cute or incredibly creepy, but it definitely shows how much he misses his buddy.
I feel like I need to take video to use as blackmail when he is a teenager and behaving like an idiot. Or to just entertain myself when he brings his first girl home.
Either one.
Hey man, show us some love and "Like" us at facebook.com/MomOfMayhem for Mayhem throughout the day!
And look REALLY cool by telling your friends about us!
Posted by Caraline Hickman No comments:

Turd On The Loose 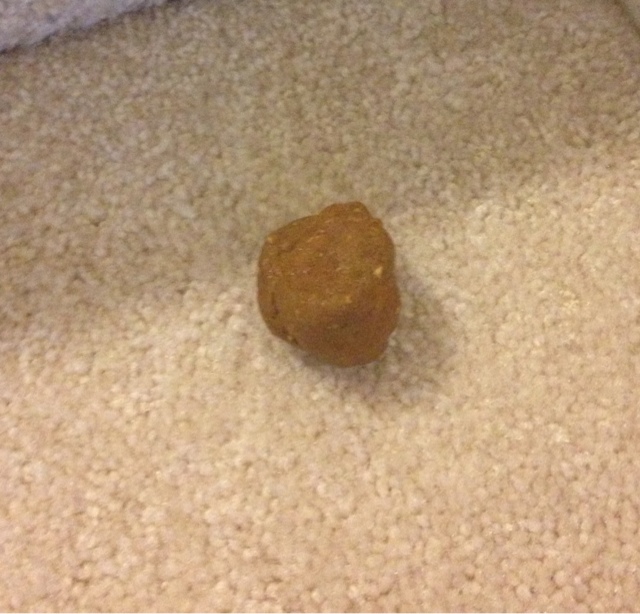 I often wonder what the difference is between children and dogs.
Often.
Like daily, if not hourly.
After all, my kids bite, jump up on people, chew on furniture, chase balls, scratch themselves inappropriately in public, run and wimper in their sleep, and LOVE to dig holes and roll in filth.
I mean seriously, are they not just naked little puppies?
This similarity was pretty much proven out the other day when Sterling proudly trotted up to me and proclaimed "hi Momma! I poop on the floor!"
And when I looked over, there indeed was a little turd nugget, sitting happily in the middle of the floor, taunting me.
I mean seriously! What kind of civilized creature DOES crap like that???
Even more impressively, she had somehow managed to squat, squeeze out a turd, and caper away... all while still fully clothed. My kid is either incredibly talented or freakin Houdini.
Or both.
So yeah, while at this point in parenthood, it takes *quite* a lot to surprise me, but mystery turds that suddenly appear on the floor?
Yeah, that does the trick.
Hey man, show us some love and "Like" us at facebook.com/MomOfMayhem for Mayhem throughout the day!
And look REALLY cool by telling your friends about us!
Posted by Caraline Hickman No comments:

Promote Your Page Too

Caraline Hickman
I have a raunchy sense of humor, a bad case of smart assery and an extreme lack of sleep.
This perfect storm, coupled with two small kids and husband who travels full time means my life is one chaotic mayhem moment after another.
If I am going to live it, you might as well enjoy it!