Hit By A Car... And Incredibly Lucky

I got hit by a car today.

And I don't mean that figuratively, like "man, I'm so tired, I feel like I've been run over by a car". Although that's true. But I mean that as in "some some old lady in a white Buick backed into me as I was walking at a street festival".

Homegirl was cruising backwards down the street in a reverse version of Marty McFly's launch in Back To The Future, and hit me straight on going about 15-20 mph.

Luckily, I was standing between the car and Bennett's stroller so I took the brunt of the hit, Ben just got the aftershock when I fell onto the stroller. But it scared him pretty good.

When she didn't stop, John was able to run around and beat on her window to get her to hit the brake.

The lady stopped briefly, then took off.

Someone called 911 and I sat there mortified as 3 ambulances, 2 fire tricks and 2 cop cars came racing to my rescue with the sirens blaring. This drew even more attention to the huge crowd gathered. All that was missing was a helicopter and a bear in a tutu on a bicycle, but I'm pretty sure they were on the way.

I have a decent bruise on my calf, my right leg feels like someone worked it over with a baseball bat, and evidently I have a lot of soft tissue damage (whatever that means) so I am on crutches for a few weeks.

Overall, I feel incredibly lucky. My friend M pointed out that getting hit in the first place is about the opposite of luck, but I stand by my "lucky" prognosis.

I was the one that got hit, not Bennett or Sterling. It was a hit that hurt me, but could have been much worse for one of them. John was there to make her stop, things could have gotten much worse if she had kept coming. And there were tons of witnesses and helpers, one incredible man even chased after the car, wrote down the tag info, then made the lady turn around and come back.

I count those all as lucky strokes. I am a little beat up, but it could have been much, much worse.

And I ended up getting a few hours to kick back and relax at the ER. For anyone with a couple of small children, you know what it's like to have a break of any kind. 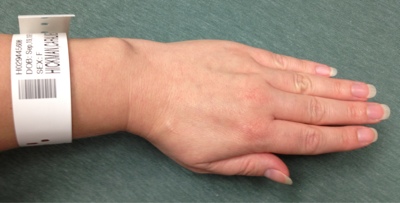